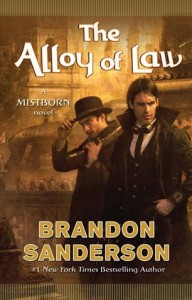 This review is rather late, but the vast reading list I had during later half of 2011 and the release of Battlefield 3 game caused this delay. I was able to finish The Alloy of Law by Brandon Sanderson during my vacations.

The Alloy of Law takes place 3 centuries after The Well of Ascension in the Mistborn universe. World has changed and Kelsier, Vin, Elend, Sazed, Spook, and the rest are now part of history or religion. Mistborns (Allomancers who can burn all metals) are now found in legends and stories. Mostly, the world now has Mistings (Allomancers who can burn only one metal) or Feruchemists (who can use the metal to safe keep few traits); and few rare individuals who are both (Twinborns). The line of the allomancy is getting thin in bloodlines.

The cities are on the verge of modernization, railways are coming, horse carts will soon be things of the past. There are beaurocratic governments and few nobles have bigger hand in the government. Things have started to slip; nobel houses are competitive (similar to Lord Ruler’s times, as in Mistborn) and corruption has been creeping in.

The lands beyond the cities are called Roughs. The Roughs is where crime and criminals escape the law (and the cities). Few nobles give up the competitive life of the city, and become lawmen of the Roughs to bring these criminals to justice to create a better safer world.

One such is Lord Waxilliam Ladrian (or Wax), a twinborn of reputed nobel house. The predictability of the Roughs makes him feel safe there. His righteousness and honesty has brought many criminals to justice and that makes him a legend in the cities. An unexpected accidental death of his whole family forces him to retire as a lawman, and return to the city to take the reins of his house, which is undergoing financial troubles. In order to get his house of financial trouble, he starts to consider a mutually beneficial matrimonial alliance with another house.

But the past somehow catches up to him. The curtain is lifted from some criminal activities that are dramatically mysterious and circumstances brings him closer to one of the crimes. The lawman inside him prevails, and in order to solve the mystery of these crimes, he takes alliance with an old ally from the Roughs, Wayne, an allomancer, and a new one, Lady Marasi, a cousin of Wax’s to be betrothed. As they investigate the crime, Wax comes face to face with another lawmen from the Rough, Miles, whom he has worked in the past and who has gone rogue. Needless to say, the soup gets thicker.

Couple of familiar characters from the Mistborn universe makes their tiny appearances towards the end. I won’t tell you who they are, but keep a look out for them. It is almost nostalgic (I felt like going back to Mistborn series one more time).

Once again Sanderson weaves a story which is worth reading. In the traditional Sanderson-esque style, the details are aplenty and as the story progresses, readers get pulled in. The story reads like a fantasy and mystery set in steampunk era. There is allomancy and then there are guns, cranes, steam engines.

The Alloy of Law stands among my top 5 books of 2011, and from the author who is among my all time top 5 writers. The book does fall short – in words. The length of the book is not typical of Sanderson’ books; in fact it is almost a third of his standard books. This was something he wrote to get his mind “cleared” before going back to The Wheel of Time.

The story provides a satisfactory ending, a story set in post-The Well of Ascension, and a great introduction to the upcoming steampunk trilogy set in Mistborn universe. It does leave few strands untied.

If you are a fan of audiobooks, the book is read by Michael Kramer, who has read previous Mistborn series and the Wheel of time series. Michael does a great job and it feels natural continuation from original series. Personally, I like to listen to the book at 1.5 to 2 times the speed, because I find them a bit slower (Apple devices allow you to do that).

If you have not read Sanderson before, and are scared to pick one of his thick books, this is a great book to explore this author (be sure to read the appendix in the back to understand how the magic works in this universe).

In conclusion, I would say this is a great story, and a great book that now finds it sitting next to the other Sanderson books on my bookshelf. A must read, listen, or both for fans of Sci-Fi, Fantasy, Steampunk, and Mystery genres.