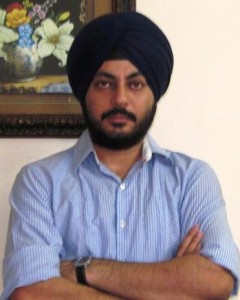 Back in the day when we were kids, we never thought where we would be when we grew up. And then we grew up. Scores of years later, I came across Rana, one more time through the internet.

When you walk away from a place, in your mind the time seems to have stopped for that place. In your mind, the images, the people freeze. My mind also had a picture of Rana as that guy I knew during school. I had frozen him back in that time too. As I started interacting with him, I saw him as a person I knew from cryogenic chambers of my mind, yet I saw another side of him. Even being separated by more than 6000 miles, I could easily identify with him. He is like my long lost brother.

Rana writes. And he writes beautifully. What follows here is a piece he shared with some of us recently. It is a well thought, well written piece. So I decided to share it with the world.

This is the first contribution "guest blog" by Gurpreet Singh Rana, and that too without his knowledge. His writings may seem small like marble, but if you look closer, they envelop the universe. I hope he will contribute more "knowingly" in days to come and tickle our gray matter.

Here he is with "The Creator and His Creation"

He sat alone one day thinking
What if I create a world of living beings?
Lo and behold and the earth came into seeing
And came the mountains, the oceans and the spring
Came the stars, the moon the sun and all other things
And all those beauties, emotions and the musings
Then came the greed of the man, the lust and the cravings
Drew they lines; the countries,the continents came into viewing.

A man sat alone one day thinking
Who is the one who has made all these belongings?
Is He there or is He not, or all are just imagining
This creation is a chain of reactions, apply some reasoning
How do I believe that He made all which I am perceiving?
I am the supreme; I am the creator, of all these worldly things
I controlled the floods; I carved the mountains, and even did cloning
I have the power to reach the moon and now I am who is controlling

He sat alone one day, but He was not sad
He had a smile on His lips as He saw the human being brag
He reflected and remarked, “Is this the beginning of the end?”

Long time back, two brothers came to a wise man to get their dispute resolved. The wise man, being wise, asked each of them to relate their story individually and asked the other to keep quiet when one was speaking. The elder brother started, “Our father was a crook and a thief”. The other nodded at his brothers statement, but kept quiet. The wise man asked the elder brother to explain his statement.

He continued, “We were a poor family when we were growing up. Our father worked in a train and locomotive workshop. After his shift was over, our father would take pieces of scrap metal like copper, brass, steel etc and bring them home by hiding them in his lunch box”.
The younger brother, kept quiet but he nodded at the right statements, showing his agreement to what his elder brother was saying.
“The metal that our father brought home, was sometimes sold to buy food, clothes or other things for the family”, elder brother said.
“Over time, some extra pieces of metal started accumulating in one of the old rooms downstairs. And by the time our father retired, the room was half full of scrap metal which was worth a fortune – close to hundred thousand rupees. Our father died few months back and we now have a dispute on division of the scrap metal. We would like you to help us”.

After much thinking, the wise man told them that it is up to them to do what they want.
“The best option in my opinion”, he said, “is to peacefully divide it equally between themselves. Or better yet, sell it all, and donate the money to a charity. Get blessings of people”.
The wise man further suggested to the brothers that that can involve a person who can evaluate the worth of the metal, and then also help them by selling it for them.
“Or just divide on, faith. Even if one brother gets a bigger chunk, remember that it is still in the family, his own blood. Do not worry about the money”.

The two brothers left and the wise man went deep into thought. After recollecting his thoughts for few minutes, he stood up as if made his mind about something and walked away. And he never met those two brothers again.

Now, if you are with me so far, then this parable may sound incomplete.
I will complete it for you. This incident actually occurred circa 1977, and it deeply moved the wise man. Years later, when the wise man’s son grew up, he told him what decision he made that day.

He told his son, “The two brothers started their case by stating that their father was a crook and a thief. This is the most disrespecting way in which they remembered their father. Their father’s act may be wrong, but his intentions were selfless. He killed his conscious to make sure his kids do not see the hardships he has seen. The hardship of unclothed during the dry winters, the hardship of sleeping on empty stomach, the hardship of walking barefoot on streets.”

“That day, my son, I made up my mind that I want you to remember me in good light and never feel ashamed of my actions. I decided that through my actions, I will make sure that when my son remembers me, his head is held high in pride and respect for me. I also made another decision that I will earn my living with utter honesty. And will make sure that not even a single penny be spent on my son which I have not earned by working honestly for it. My actions and my life should never be cause of shame to my descendants. Through my actions, I want you to remember me with pride that I am your father and you are my son”.

Allow me to add another twist to the story. The wise man I am referring to is my father (yes … I think he is very wise). Of course, you may have figured out, it was me to whom he said these things.
Who were the two brothers, you ask; well, I will keep that to myself.

Every time I think about this incident and look back, I am filled with pride and respect for the person (my dad) about the decision he made and changed his entire life around me. He has always been my conscience – told me to do the right thing, whether I wanted to do it or not.

Now, I have my own kids. Every time I look at them, my heart fills with the fire that burnt in my dad’s heart back in that day in 1977. I am motivated to be like my him. Barring the teenage years of my kids (where I am expecting they would hate me anyways), I hope they feel a sense of pride in me as I do for my dad, when they grow up.

Find that special little ones in your life, give them a hug. Don’t forget to ask yourself, how will he or she remember you.