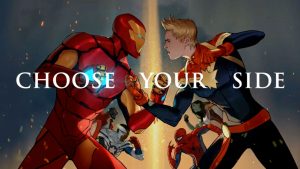 Marvel launched the second Civil War within Marvel Universe last year. The lines were drawn and the sides chosen. And the fight began with Captain Marvel and Iron Man on opposite sides this time. I went through the comics in the main series and all the in between fillers. So here is the list for Marvel’s Civil War II.

Civil War II is a 2016–2017 Marvel Comics crossover storyline built around originally seven, extended to eight and now a nine part series (if you consider The Oath 001) limited series. It ran through almost all other titles published by Marvel. The tagline for the series is, “Choose your Side “