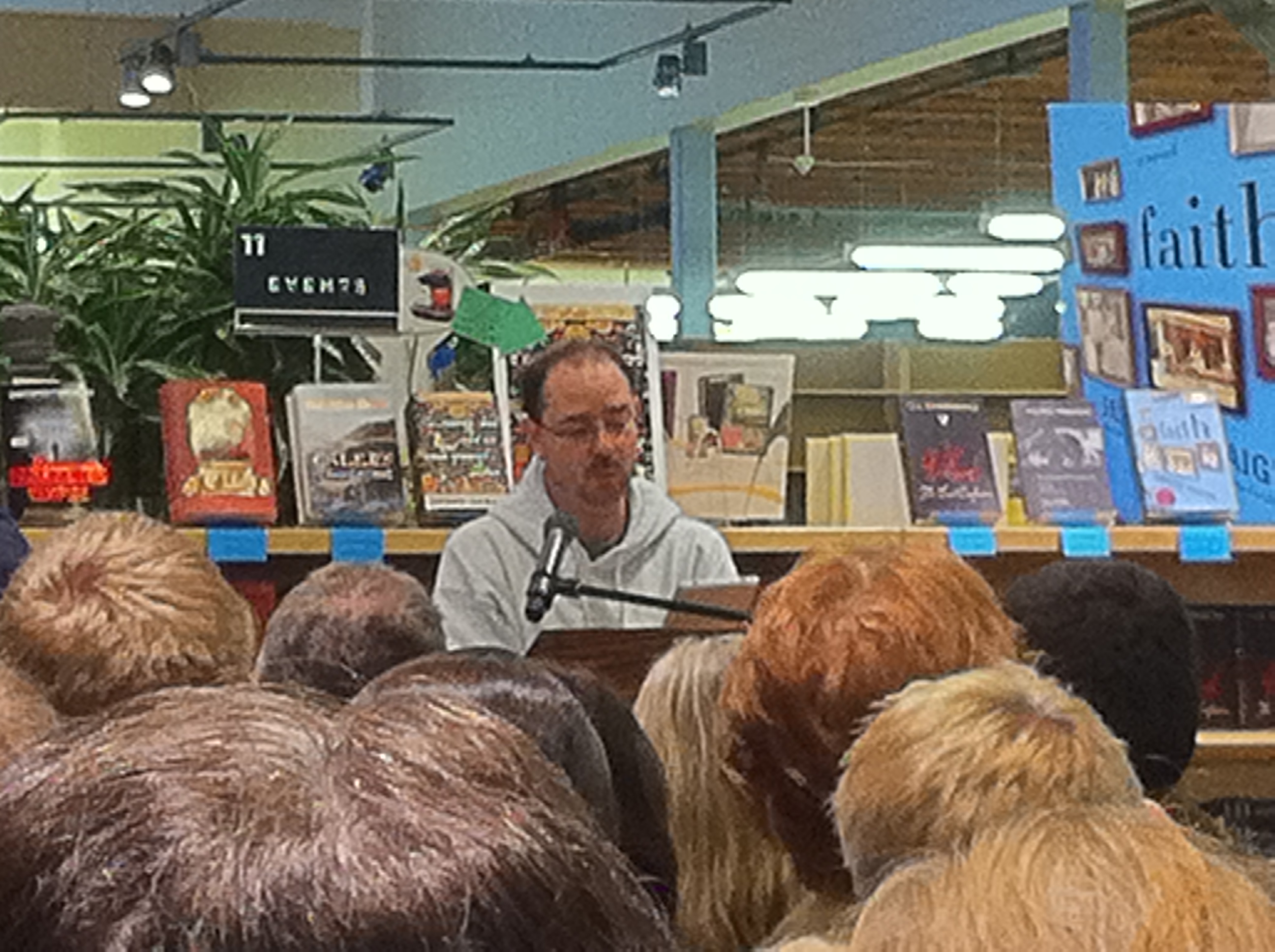 Few years back, Audible Frontiers did an experiment – METAtropolis. This was a collection of 5 novellas about our future. John was the editor for these five stories.
That was the (audio)book that introduced me to John Scalzi.

Needless to say, I enjoyed his story. So when Powells Books event showed up on my calendar that John was visiting Powells, I thought, well let’s just see what he has to say.

John was a lot of fun. Very very very (did I say very?) funny guy …
Once he took to the dais, he offered the audience what to read “I can read from the new book Fuzzy Nation, or I can read chapter 1 of my upcoming book which has a working title, and that will be published in 2012, and which I think is amazing, and I will also give you a chance to guess the working title.”

“Let me see the hands of people who want me to read from Fuzzy Nation.” Only one (or maybe two) hand(s) went up.

“Who wants me to read from my upcoming book?” All the hands went up.

He started reading and before the sentence was up, he stopped and made everyone swear, that they won’t divulge what he is going to read, and also requested to turn off recording devices (really, I could record that, damn!).

After the oath swearing ceremony, he did read from his upcoming book, and someone did guess the working title correctly (although I could not hear it, as I was sitting in the back row).
And dude it was awesome !!! (also that he told us, this is how we explain it to the folks who missed his reading).

A quintessential reader; he did the voices, the antics, brings variations and emotions to his reading.
All in all, he made it a lot of fun (John, have you thought of doing your audiobook yourself?). For the next 25 minutes, he kept people laughing, and there was never a dull moment. I felt like I was in a comedy show.

After the reading he gave another anecdote – Tor.com did a survey of best Sci-Fi books of the decade and they found that the books with following words in the name come to the top and catch reader’s fancy – shadow, war, night, dragon, dead, city …
So on April 1 (Ahem!!!), it was announced on Tor.com that John Scalzi was going to write a book called “The Shadow War of the Night Dragons – Book 1 – The Dead City”.
During the Powells book signing, he read the first three sentences, the first sentence is 155 words long, and uses the word black 11 times (you can read it in the link below).

John came out as a genuinely funny person. His anecdotes from his life and family and giving them a funny twist was commendable. He talked about his family, daughter, three very important cats in his life, and his blog – Whatever.
He related an anecdotes from his parenthood (which resonated with my own experience) that kids would pick up anything that they would hear as they are starting to speak.

All in all it showed how much fun a good author can have while doing the thing he or she loves – writing.

I am a fan John, an now I am going to read your works … right after I finish The Wheel of Time (I am more than half way through).

Thanks for a great evening, John. Keep writing, and they will come …

Here is a link to the “The Shadow War of the Night Dragons – Book 1 – The Dead City”
http://www.tor.com/stories/2011/04/the-shadow-war-of-the-night-dragons-book-one-the-dead-city-excerpt
I have to be honest here and tell you that I did not know any of this and the links were searched while writing this.