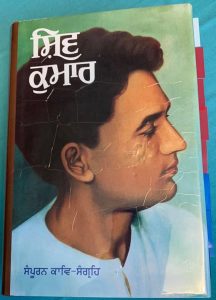 Shiv Kumar Batalvi’s poetry stands for it’s heightened passion, separation and lover’s agony. He is indeed Birha da Sultan – the king of separation of a beloved. He has dived into the abyss of pathos and put it in words that have inspired both the lovers and the lovers of Punjabi language.

The beauty of Shiv’s poetry is the simplicity of his words at the surface but pack a punch at a deeper level that has few rivals in the language. At an age of 30, he became the youngest recipient of Sahitya Akademi Award, a literary honor by India’s National Academy of Letters, Sahitya Akademi.

For more than 4 decades, his poems have attracted the singers with his poignancy and emotions. Each one has sung his poems with welled eyes to varied music genres. From acapella version by Shiv himself (check my blog here) to modern renditions, every singer has brought their own style, music, and flavor to his poems. 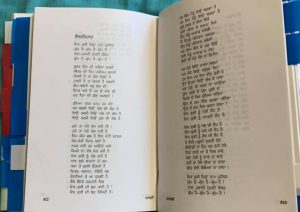 A few months back, as I started to pluck the strings of the guitar, once again Shiv’s poetry beckoned and I looked up to a more modern rendition of my all-time favorite poem – “Ishtihaar“. It is also sometimes called “Ikk Kudi“. The song has been arranged in musical notes by likes of Rabbi Shergill, Hans Raj Hans, and classic, Mahender Kapoor’s version. I had to find a version that a novice guitar player like me could play easily. And I found just the one from the movie Udta Punjab. It is sung by Diljit Dosanjh, with music by Amit Trivedi.

This version attracted me for a number of reasons – the simplicity of music arrangement, modern guitar chords, and of course Shiv’s poetry. As I started dissecting the song, I found that there was not a perfect version that I can play. So I had to create chords for it first before any strings would vibrate on the guitar.

Being brought up in the northern part of India, brings back fondest memories of Patang-Baazi (Kite Flying Competitions) and Rau-di-Kheer (Sugarcan Rice Pudding) to mind during early parts of January – along with the great festival of Lohri.

Punjabis, irrespective of their religion, continue to practice their Punjabi Folk Religion. Respect to the seasons and the natural elements of fire, wind, water and the earth is very important. Among such rituals, is Lohri – a festival celebrated on January 13. It is dedicated to the end of the Winter season in northern part of India. The day is also believed to mark the end of the winter solstice month, arrival of spring, and beginning of the Spring Harvest season.

The atmosphere is electrifying during the festival. The celebrations involve the friendly kite flying competition in northern India, during the day. During dusk, the families gather around the bonfires, and sing folk songs eating tiny sugar balls coated with sesame seed (gur di rewari), peanuts (moongfali), and pop corn. These are also offered to the fire, as an offering for a prosperous harvest season ahead.

In houses that have recently had a marriage or childbirth, Lohri celebrations will reach a higher pitch of excitement. Punjabis usually have private Lohri celebrations, in their houses. Lohri rituals are performed, with the accompaniment of special Lohri songs. Singing and dancing form an intrinsic part of the celebrations. People wear their brightest clothes and come to dance the bhangra and gidda to the beat of the dhol. Punjabi songs are sung, and everybody rejoices. Lohri is a great occasion that holds great importance for farmers as this is the beginning of the harvest season for the winter crops. People residing in urban areas also celebrate Lohri, as this festival provides the opportunity to interact with family and friends.

Among the dying rituals is the visit from the kids from the street, who go door to door singing the Lohri song that tells the adventures of the Abdullah Bhatti (Dulla Bhatti) – Robinhood of Punjab, who led the rebellion against Mughal Empire during the reign of Akbar.

Food is another integral part of the festival. Sarson da saag (mustard green) and makki di roti (flat corn bread) is usually served as the main course at a Lohri dinner. Some of the men wait in long lines at the local sugarcane juicing machines to get the fresh sugarcane juice, which the women use to make a rice pudding (kheer). On January 14, the next day, this rice pudding (generally served with yogurt) for breakfast and lunch to indicate sweet beginning of the new year, and spring season.

PS. Some references were used from Wikipedia.

Shiv Kumar Batalvi is an Sahitya Academy Award (1967) winning poet of Punjabi language. He is known for his romantic poetry for its passion, pathos and the pain of separation. Batala (District Amritsar, Punjab) became his home town in India after the partition, and that also gave him his takhaluss, “Batalvi”. It is said that he had a failed love affair that came out in the form of intense passion and pathos in his writings. He never confirmed these rumors. He tactfully avoided the subject during his interviews.

His poems are very popular among the Punjabi singer on both sides of the border. Jagjit & Chitra Singh, Nusrat Fateh Ali Khan, Surinder Kaur, Assa Singh Mastana, Mahendra Kapoor, Hans Raj Hans, are some of the singers who have brought the birha from Shiv’s songs to the vast audience.

Here, I am presenting some of the rare recordings of Shiv Kumar Batalvi reciting his poems. This is how he meant these to be read, sung, and recited. Click on the links below to play the songs in the browser.

The recordings are noisy, as these were converted from ancient All India Radio (AIR) archives. They will sound best with low treble. I am working to clean them up, and will update these.